Arial has been around since the 80’s when it was designed to be a replacement for the Helvetica font in Microsoft software. Since Helvetica is widely used, the team needed to come up with a very similar solution that would save the company the licensing fees required if they used Helvetica. Arial’s design characteristics are of the neo-grotesque style and perfectly balanced the width of the Helvetica type. Google uses Arial font in their search results and Skype’s logo is a rounded version of the font. Since it’s easily readable, it’s been a favorite of t-shirt designers. An interesting factoid, even though Microsoft replaced Helvetica in their software, Microsoft’s logo is designed using Helvetica!

Bodonihas a distinguished and long history being crafted in the late eighteen century by printer Joseph Bodoni who operated a shop under the patronage of the Duke of Parma. The intent of this typeface was to dazzle the reader with the sometimes very thin strokes contrasted with thicker elements. Because of this, it sparingly used as a web font since often web type must be displayed very tiny. However, its life as a designer’s font has it being used in Hilton Hotel’s restaurant and bar menus and perhaps most famously, in the logo for the band Nirvana. It’s graced many a custom tee as it states elegance and boldness.

Cooper Black was created in 1922 by Oswald B. Cooper after being heavily influenced by one of his teachers, none other than Frederic Goudy (of Goudy type face fame.) It was released and was used abundantly primarily in advertisements of the day. Cooper Black has experienced many reintroductions into mainstream society perhaps most famously as font of use for The Beach Boys iconic album, Pet Sounds. However, one of the most beloved t-shirt designs of all time features Cooper Black seen below:

Futura’s design is based upon its name, the future. Many early 20th century typefaces were simply recycling traditional type styles used in signpainting. The font’s inventor, Paul Renner wanted to create something totally unique and leaned largely towards near perfect geometric shapes. Even though it’s quite old when speaking in digital terms, it’s was used as the main font in the wildly popular online game, The Elder Scrolls V: Skyrim. You can also see it used in famous logos such as that of Absolute Vodka, Louis Vuitton and Red Bull. There is no mistaking its value when designing custom t-shirts since it’s in-arguably easy to read.

Impact is as bold as its name and is intended to achieve IMPACT in advertisements and statements. Designed by Stephenson Blake in the mid 60’s he stated his goal was, “to get as much ink on paper as possible in a given size with the maximum possible x-height.” We share his desire as concerns ink and have printed plenty of t-shirts with designs that feature this versatile and attention grabbing font. In fact, Impact is the “go to” font for all types of web memes 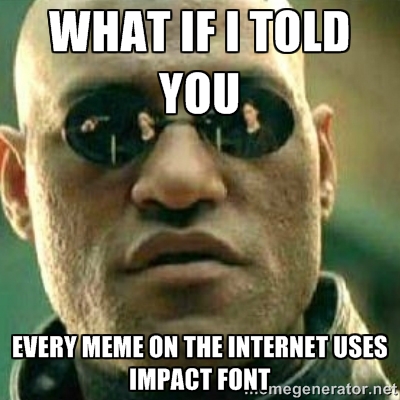 Educationt-shirt design
By Melissa KennedySeptember 15, 2015Education, Tips and TutorialsLeave a Comment on 5 Iconic Fonts for T-Shirts