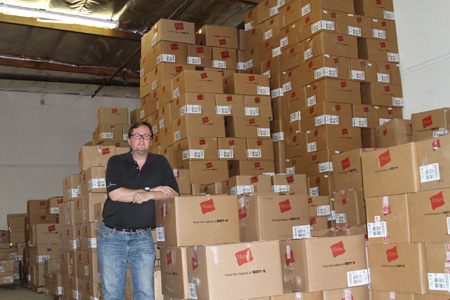 To round up the last of 2017, we want to share with our customers why we exist as a service, how the design studio came into being, and why we do business in the manner in which we do it. The story of DesignAShirt.com is rooted in the idea of a kind of service that was needed, but few, if any were offering. Particularly at the level that was envisioned by John Anton, DesignAShirt’s creator and owner. That service was the capability to design a shirt online in the comfort of your office or home and have the custom printed t-shirt delivered to your door anywhere in the U.S. faster than any local printer could consistently deliver.

John Anton began his screen printing career in the 1980’s after he completed a Master’s degree in Marketing at ASU. Upon joining the corporate world after graduation, he quickly realized that was not his destiny. Being an entrepreneur with the freedom to innovate and operate a business defined by his personal convictions of how to treat customers and employees was the only path that made sense. He was going to make a mark on the world on his own terms.

At that time John already had great interpersonal skills which made it easy to establish relationships and networks to promote the value of custom apparel for advertising and building communities. But what he didn’t possess was the skill to actually produce the custom clothing. Becoming dissatisfied with length of time he sometimes had to make his customers wait for their orders using the services of a local printer, he decided to take matters into his own hands and produce the orders on his own.

The first screen printing press he purchased for this venture came recommended by a former business colleague that didn’t want the competition so his recommendation was a defective press. Once John realized the boards of the press were warped, he decided the attempt at sabotage wasn’t going to hold him back. Instead he adapted his screen printing method to negate the issues the warped boards introduced and engineered mechanical fixes to ensure his prints looked just as high quality as any printer operating a state-of-the-art press.

That first hurdle actually catapulted John’s artisanal screen printing skills since he had to work harder and think creatively. In the early days he was also working out of his home’s garage working to expand his business. Once the HOA found out, he had to find another location to fulfill his hard-won customer orders. The economy was in poor shape so banks downright refused to offer the 26-year old a loan.

Fortunately his family knew his determination and character and gladly risked co-signing for loans on a warehouse where he could grow his screen printing business. He strategically chose a location close to a major Phoenician thoroughfare, the 202, and ASU campus to make local order pickups convenient for his customers. John also called this warehouse home as he put in a shower and a bedroom. The former bedroom is now his office.

Two big customers changed John’s life and shaped the future which would lead to DesignAShirt.com. One was former ASU basketball coach, Bill Frieder, who trusted John to produce 5000 shirts. The other was Mike Carter of the Thunderbirds who needed sweatshirts for the Phoenix Open. These two influential customers allowed John to prove that he could produce high quality custom printed apparel, in large numbers, and deliver on time. It led to an order from Phoenix Children’s Hospital of 50,000 shirts, the largest order to date during the early years.

In 1987 John bought a fax machine which of course seems antiquated now, but at the time is was unheard of for a screen print shop to utilize this kind of technology and it quickly set him apart. By researching and implementing better ways to produce high quality printed t-shirts quickly, he revolutionized the Phoenix area screen printing industry by having his art department adopt the use of Corel Draw to produce digitized art ready for screen printing rather than the old school method of hand cutting art.

While screen printing equipment and methods evolved, the manners in which customers were able to interact with screen printers hadn’t changed much. This was so, even though the Internet was changing how people exchanged ideas and information. Placing an order for custom apparel was a laborious chore. Running a business efficiently and offering convenience to his customers is one of the core tenants of John’s business ethic. Consistently streamlining processes and recognizing the value of the pioneering spirit, he decided to commission the development of an online custom t-shirt design studio, one of the very first in North America. This was the birth of DesignAShirt.com. It was a risky investment, just after 9/11, but John’s business instincts guided him to the course of the future and that was ecommerce.

In the early 2000’s, software development was not anywhere near as prolific as it is today so to find people with expertise to develop this vision was a struggle. John and his team went through many developers trying to produce software that was intuitive and allowed users to creatively fulfill expectations for, customized apparel with the greatest convenience. The expense was staggering but it made John and early employees of DesignAShirt many of whom are still with the business today, all the more determined to make it work. DesignAShirt.com made its debut online in 2003.

While online t-shirt printing websites are more common now, what has never changed about John and his staff at DesignAShirt is the belief in the importance of never disappointing customers. Care and pride of workmanship goes into every custom print. Even on our automatic presses, screen printing experts, some with decades of experience continuously review the process to ensure each and every print is perfect. Bulk orders may have the same design on each shirt but each shirt is an individually created work of art with the understanding the product has purpose for one our customers.

It remains essential that we make our customers look good and we produce t-shirts and other apparel products that are good for family, good for business, and good for team building. That’s the story of DesignAShirt.com in 2017. We will continue to strive to innovate and make ordering custom t-shirts from our website an experience for our customers that remains memorable.

t-shirt designst-shirts
By Melissa KennedyDecember 28, 2017Tips and TutorialsLeave a Comment on Online Custom T-shirt Printing – The Story of Why DesignAShirt.com Came to Be