We recently had the pleasure of interviewing the very charismatic and enterprising owner of Beard Monster. Austin Pressley owns and operates his business out of Peachtree City, Georgia specializing in handcrafted beard care oils, balms, and washes along with mustache waxes and complimenting gifts and accessories. This DesignAShirt patron piqued our interest quickly as he offers uniquely formulated products for a very unique breed of clientele, the free spirited and unequivocally masculine bearded man.

What inspired you to start Beard Monster?

Austin Pressley- I’ve always worn long hair and facial hair. I learned about beard oil and tried it, and liked the results. When I looked into the ingredients and realized it was made of olive oil and fragrance, I was flabbergasted. Did I just pay $20 for a bottle of olive oil?! I wanted to make a better product for a better price, and knew that with a little effort, I could.

Which product was the first ever offered?

A.P.- Our beard oils were the first products we offered. I introduced our five main scents at the same time, along with a sample pack with a small bottle of each. We were originally selling on Etsy, and our first sale came through a couple of days after we opened up.

What if any, are your views about beards as a form of self-expression?

A.P.- Beards are as unique as the hair on our heads, and can be every bit as useful for self-expression. I think beards have become an important part of the expression of our identities as men, too. Grow them long, or keep them short if you choose. Braid them, stick flowers in them. Let them express who you are. I’ve always been a bit wild, so I have always had long hair and some degree of beard. But a beard can reflect the opposite, with a shorter, neater trim. There’s a lot you can say with your beard that you can’t really express with a smooth face.

You have a passionate fan base, what is about your brand that compels such devotion?

A.P.- The Beard Monster brand appeals to what some might call a “niche.” Every other beard product company out there sells men on the idea that with their product, you’ll become a dapper, well-coifed gentleman. As though every bottle of their beard oil came with an Armani suit. That’s not the kind of guy I have ever wanted to be, and not the kind of guy my lady (and business partner) is interested in. Other beard companies try to appeal to the bearded man’s desire to be George Clooney. We appeal to the men who would rather be Rob Zombie. The public has responded, I think, because that’s a lot more men than anyone thought. 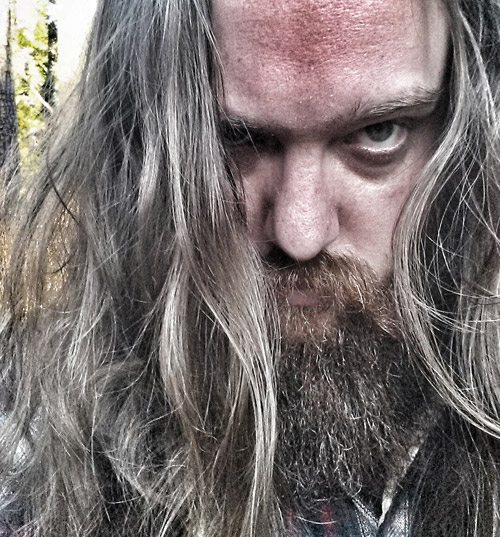 Why do you feel beards have made such a strong comeback in recent years?

A.P.- The “metrosexual” movement was something of a rejection of traditional notions of masculinity. And rejecting tradition in favor of a new way of thinking is great! But I think when men started “manscaping” and slipping on pink cardigans, we were going to far in the opposite direction. A lot of guys (myself included) saw that and pushed back. I didn’t feel the metrosexual thing, and I showed it with long hair and a big beard. When a lot of guys started doing that, the trend pushed back toward a more traditionally masculine look. It’s ultimately about accepting ourselves, I think. Be yourself, and express who that is with your look. And if you embrace the fact that you’re a man, a mammal, and therefore a hairy beast, then grow out your mane and be proud of it.

Do you formulate your own oils and balms or work with a team?

A.P.- It’s all me. My gal is my partner in crime, and she helps with making our products and shipping them, but the recipes all come from my twisted little brain.

Does beard etiquette exist and if so, can you detail what that involves?

A.P.- There’s a quote that I see pop up a lot online: “When two beards cross paths, the larger beard has the right of way.” It’s funny, but it does reflect a kind of truth. A study I read (yes, I read studies about beards – I swear I’m not boring) said that with a nice beard, you’re more likely to receive compliments from men than women. And it’s true. I do receive compliments from women, but more often it’s other bearded men who pass me in the grocery store and nod and say “nice beard, man.” And I do the same. Beards are one of the only things guys always seem comfortable complimenting each other on. I don’t know if that’s an etiquette so to speak, but bearded men certainly have a sort of kinship.

We see you have retailers as far away as Brazil. How did that aspect of the business evolve?

A.P.- Honestly, our retailers have approached us. We started getting inquiries as our social followings grew, and we typed up a set of wholesale rules and began sending that out to anyone who was interested. We keep saying that we are going to get to work approaching some retailers, but we stay so busy with our own retail that we don’t really do it. We just make the wholesale deals when interseted retailers ask about it.

What is in the works at Beard Monster?

A.P.- Right now I’m unrolling 5 new fragrances (one of which was anounced last week – the Witch’s Brew, a coffee scent). I’ve also created a couple of new products that I will roll out in time. We are about to overhaul our beard kits as well, with some new tools that will make them way more complete. We’re sponsoring a competitor in the Southeastern Beard and Moustache Championship in May, and we’ll be going up there to cheer him on as well.

What purpose do the custom t-shirts serve?

A.P.- Beard product companies have a lot to do with expression and identity. The company you prefer speaks to who you are, and so there’s a lot of brand loyalty. People want to wear the shirt of the company they buy from. We used to get a lot of requests for shirts, stickers, hats, that sort of thing. So we figured if our customers were asking for them, we better provide! 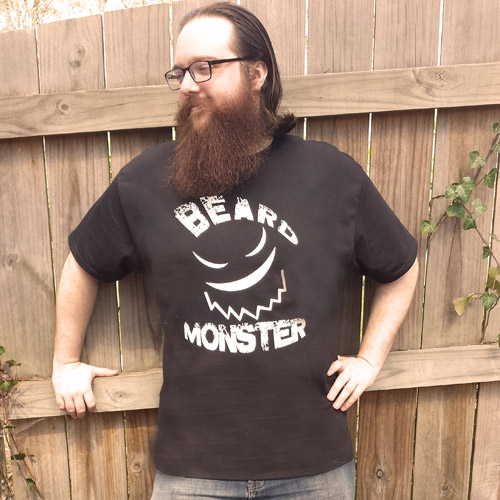 business t-shirtscustomerssmall business
By Melissa KennedyApril 28, 2015Customer Spotlight, Featured T-Shirt DesignersLeave a Comment on Beard Monster and the Explosion of a Beard Nation