2016 has been a rough year by most standards. There’s war, attacks of all kinds, social and political turmoil and lots of people would like nothing more than to put it bed. These issues are impactful and not to be taken lightly but there are a lot of positive stories too. We’d like to end this year by featuring some inspiring events, stories, and reports that have taken place recently and sincerely wish everyone a Happy 2017!

In Gainesville Texas a group of teenagers that typically never have anyone cheering for their side got a heartwarming surprise thanks to the wishes of a few members of the opposing team. The Gainesville Tornadoes aren’t used to having cheerleaders, cheering fans, or any of the usual bolstering that is typical of high school basketball games. That’s because the Gainesville Tornadoes are not made up of your typical high school athletes. They are actually felons who get to participate on the basketball team as a reward for good behavior.

None of the details of their crimes are revealed in this story but given their age, we’ll give them some latitude and accept they are paying their debt to society. That’s what a couple of the students from The Vanguard, a private school that was hosting the Tornadoes did. The students asked some of their fan base to cheer for the opposing team. The reaction from the players for the Tornadoes is priceless. The encouragement and acceptance they received from total strangers will leave a positive mark on them for years to come.

Most people take the gift of seeing the world in color for granted but when this father of three sees color for the first time, his emotional response is touching. You can see how he’s overcome almost immediately after the putting the glasses on. Color blindness impacts roughly 1 in 12 men and 1 in 200 women. EnChroma glasses cut out sharp wavelengths of light to enhance the specific colors of red and green also impacting purple and orange.

We don’t know the back story of this sweet video but this woman gets a Cochlear Implant that restores her hearing. Cochlear implants work differently than traditional hearing aids which amplify noise. The implant bypasses the damaged part of the ear. Although the nature of the hearing is different, recipients are able to understand speech in person and over the phone. The first words her boyfriend utters to her is a proposal of marriage so not only is she extremely happy about gaining a sense, she is beseeched by her best friend to spend the rest of their lives together.

During a diving accident in his teens, Ian Burkhart was permanently paralyzed. This year he was the recipient of a brain chip implant that connects to electrodes in his hands, he’s able to will movement in his hands for the first time in five years, completely bypassing his damaged spinal cord. The seemingly miraculous technology differs from other technology recently developed to help paralyzed people in that it’s not a detached prosthetic. The implant is not overtly invasive and the electronic sleeve is paper thin. The technology is also a smart technology in that it’s part of machine learning continuously improving with interactions. Currently the technology is only available in the lab but a wireless model is being worked on.

During the 1980’s, our use of chlorine containing chemical compounds like the kind used in aerosol sprays caused a horrifically scary problem, a hole in the ozone layer above the Antarctic. The chlorine in our atmosphere destroyed ozone because of a reaction with natural conditions. Without the ozone layer we would be exposed to deadly ultraviolet rays. The Montreal Protocol is an international treaty drafted to eliminate the use of these chemicals and levels have been on the decline resulting in 4,000,000 kilometer shrinkage of the ozone hole. That’s wonderful news for everyone!

Veterans around the country were offered a day of free dental care compliments of Aspen Dental. More than 300 offices across the nation opened their doors to provide much needed services to veterans that would not normally be able to afford this type of care.

Kids meditate rather than get detention

A school in Baltimore decided instead of punishing bad behavior with detention, children that were disruptive would instead be sent to the meditation room. The school’s students start each morning with breathing exercises. Baltimore is one of the most dangerous cities in the U.S. and many of these children experience a lot of negativity in their home life. Instead of punishing, they teach them breathing exercises to control their impulses and reactionary behavior. Since implementing the program the school has reported far less behavioral issues within the student body.

A young woman that has spent most of her life involved with charitable food pantries worked with a programmer to develop a nationwide database that helps disperse excess food donations. Organizations sign up to identify who they are, what they need, and how far they are willing to travel to pick up the charitable donation. Restaurants, grocery stores, and food pantries no longer have to throw away excess food. If the need is there and the donation matches what’s needed, users receive and alert. 1 in 6 Americans struggle with hunger and the development of the Means database is a step towards solving this problem. 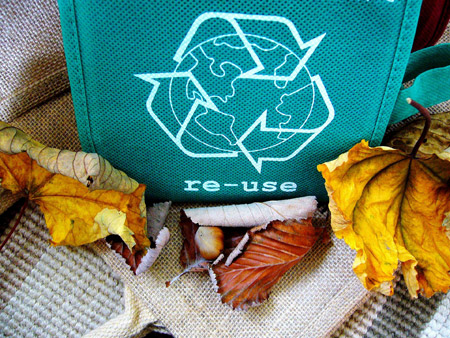 In Canada, one city has tackled the issue of textile garbage in a big way. The government officials of Markham have been all about the sustainable life for decades but what they found out about one recyclable material was disturbing. Only 15% off discarded clothing was being recycled, mainly because people only donated their nicest discards, the rest went in the trash because there wasn’t an understanding of additional ways to recycle textiles. Garments can be repurposed in a variety of ways including industrial. Carpet padding, home insulation, landscaping fabrics and even diapers can be created from recycled textiles. The city now has textile recycle receptacles all over the city.

Saltwater Brewery in Florida invented a revolutionary idea. Edible six pack rings that actually feed marine life instead of endangering it. Marine biologist have warned about the deadly impact of plastic on marine life and even though a lot of people now cut plastic rings, fish still ingest pieces. Not to mention the impact on the environment when plastic deteriorates. The owners of the brewery partnered with engineers from Entelequia, Inc. to create the first biodegradable and edible packaging in the beer industry. The material is made from barley and wheat rivets, natural discards from the brewing process.

t-shirt designst-shirts
By Melissa KennedyDecember 27, 2016EducationLeave a Comment on 10 Wonderful and Inspiring things that Happened in 2016